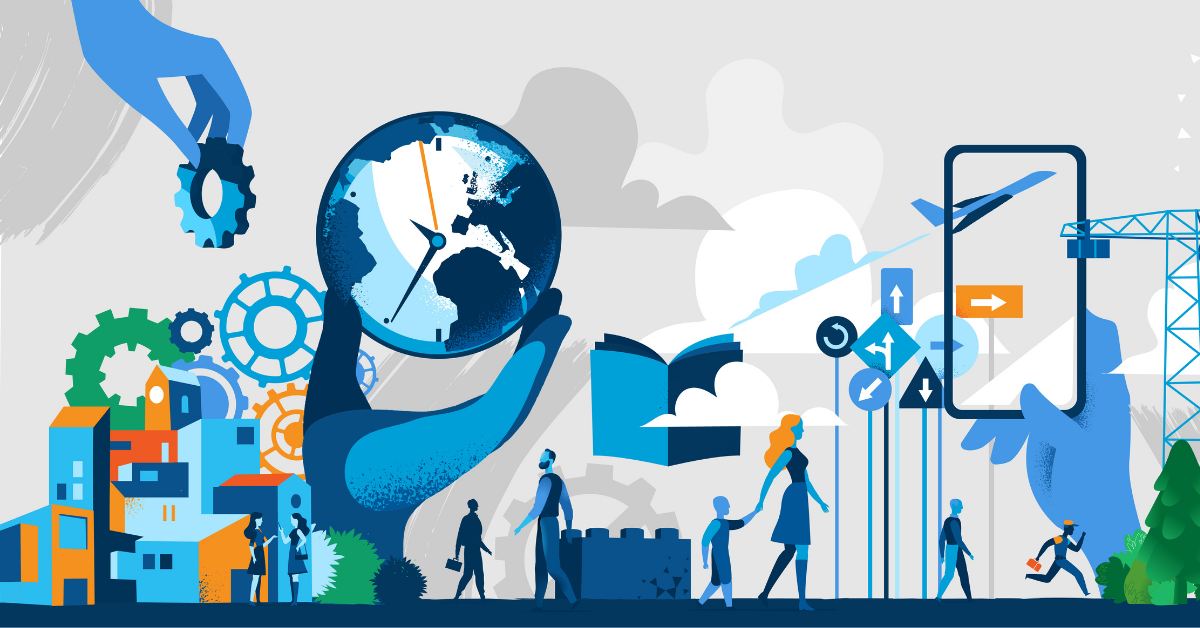 Future of “work”: Future Sustainability, Regeneration and Innovation of Australia Over the Next 20-30 Years

The future of “work” is more about cognitive skills instead of manual skills (Deloitte 2019). Rapid development in technology has made a drastic change in employment and the style of work (Luk 2018). One example is how automation technology like artificial intelligence (AI) and data mining unload significant labour pressure (Manyika 2017). Advances in technology pose a threat to the labour market as automation technology brings about superior outcomes and adequate progress (Deloitte 2019). However, despite the so-called “threat”, the current labour market benefits from embracing the change and adjusting the self-skill to accommodate the needs of an evolving society (Manyika 2017).

The future of “work” offers unparalleled opportunities and supports sustainability and progress for the Australian labour market (Manyik 2017; OECD 2019). Automation technology is inevitably involved and is gradually replacing the low-skilled manufacturing workload. Studies show that the shift to automation has resulted in a 20% employment decrease in the manufacturing sector from 1995 to 2015 (Marr 2019; OECD 2019). However, the change is transiting and pushing the labour market into a more technological-based, high-skilled talent pool (Khallash & Kruse 2012): it requires an effective eco-system for lifetime studying, creating openings for vulnerable workers from technology (OECD 2019).In the meantime, the work structure is adjusted to meet the market needs (Manyika 2017). Apart from its impact on the labour market, automation technology is also reshaping the current work environment by turning mechanical, muscle-added, repetitive tasks into scripted, self-improving algorithm knowledge (Manyika 2017). Not only does it increase efficiency in production, but machine learning and the production of automation are also proven to be error-free and more productive, which in turn provides a positive output to society (Manyika 2017). As such, the future of “work” strengthens and expands long-term competitiveness by increasing flexibility and efficiency of production through communication, information and intelligence, hence its contribution to sustainability (Gabriel & Pessl 2016) (Refer to Appendix A).

The future of “work” benefits the future regeneration and innovation of the Australian market in three different agents: work environment, workers and work structure. Manyika (2017) argues that people will be doing physical work in highly structured and predictable environments, continually stimulating and creating optimised results. It innovates how workers interact alongside machines. And more compatible interaction will raise productivity: for example, the average gross domestic product (GDP)relating to global export has increased from 23% in 1975 to 43% in 2017 (OECD 2019). Furthermore, the future of “work” demands various technical talents, state-of-the-art interfaces, which challenge the market to acquire development.

However, the shift from standard to non-standard employment provokes concern for opportunities and social rights. This will be further discussed in the preceding sectors.

The future of “work” is confirmed to have an influential impact on workers, work environment and work structure (Deloitte 2019). However, advantages and disadvantages co-exist and require further adjustment in policies and market mindset.

Manual-intensive workload will be replaced

Computers and machines will be able to substitute workers in performing routine tasks while reforming the non-routine tasks (Healy, Nicholson & Gahan 2017). Because of this, there is a significant increase in for humans to undertake abstract and cognitive tasks instead (Marr 2019). According to the OECD (2019), the share of jobs in the information technology communication (ICT) sector has increased by 25% over the last two decades. Moreover,36% of Australian jobs face a significant risk of automation replacement in 2018 (OECD 2019). At this rate, manual-intensive occupations in Australia will face a severe decrease in the next decades (Refer to Appendix B and C).

Talent skillset will be more cognitive-based

With the decline of repetitive workload and the rising trend of high-skilled talent, the Australian worker will be more sensitive to the new technology change (Healy, Nicholson & Gahan 2017). Individuals will react and engage in continuous studying, so they become more resilient and adaptive (Healy, Nicholson & Gahan 2017).In the meantime, the human workforce will be more optimistic about developing the initiative for better collaboration between man and machine (Marr 2019) (Refer to appendix).

Future jobs will be leaning toward a more flexible format due to the advancement of technology (OECD 2019). Mobile technology frees the worker from location restrictions, while artificial computer unburdens the worker from repetitive tasks (Healy, Nicholson & Gahan 2017). Mobile technology enables organisations to cut costs and utilise a virtual talent pool. Organisations now can take advantage of the virtual team and casualisation in a timely and cost-effective fashion (Healy, Nicholson & Gahan 2017; Marr 2019). However, extensive usage will lead to low wages and job insecurity (Healy, Nicholson& Gahan 2017). According to OECD (2019), 25% of workers in Australia are casual workers, of whom over half report having no guaranteed hours. As such, work in the future will be more flexible, hence an insufficient workload for full-time roles. (Refer to Appendix D).

Automation will result in a massive reclassification and rebalancing of work (Brown, Gosling & Sethi 2017). Furthermore, Australian economic standing is not guaranteed due to the constant demand for creative and innovative talents (Deloitte2019). However, it is still unknown if there will be enough work to make up for what the market is going to lose (Manyika 2017; Sparkes 2019). Australia, in particular, has shown an increasing employment rate since 2014 (OECD 2019). As such, Australia is experiencing a minimal impact on job loss, and there is no significant evidence that digital change has led to the accelerated destruction of jobs (Deloitte 2019). The concern and evidence conflict mean the future labour market remains unknown (Pash 2018; Sparkes 2019) (Refer to Appendix C and D).

New technologies are designed to replace existing tasks. Therefore, the expectation is more natural to plan and evaluate. However, it is challenging to plan for future tasks and demands that do not yet exist. Furthermore, it is unknown how new technologies may further stimulate unexpected consumer demand (Healy, Nicholson & Gahan 2017; Marr 2019).

Economic growth closely connects with technological developments (Brown, Gosling &Sethi 2017). With that, organisations and individuals are seeking efficient ways to achieve higher productivity and living standards. Improvements in future living standards rely on continued gains in productivity, which means fostering creativity and innovation in the workplace (Deloitte 2019). As such, the disruptive technology will be accelerated by enabling the knowledge upgrade and talent update.

Although rapid technological development is mostly positive, it also needs regulations and intervention to take care of the overlooked labour market (Brown, Gosling & Sethi 2017). Many workers are poorly protected by traditional labour laws and social policies (OECD 2019). However, Australia’s outstanding labour law and policy settings are designed to be harnessing the benefit of casualisation and minimise the impact of illegal labour acts(Healy, Nicholson & Gahan 2017). As such, it is considered to ultimately shape the negativities of technological forces(Healy, Nicholson & Gahan 2017). A series of integrated social protection and benefits will protect the socially vulnerable groups and drive the labour market skill level, hence the public living standard by maintaining a stable source of income (Refer to Appendix E).

ICT as a driver of innovation

Technology itself is the primary driver to assist the progress of the future of “work”, both economically and socially. Transforming manual work into cognitive knowledge is the core facilitator that builds and reshapes workforces, businesses and work practices(Brown, Gosling & Sethi 2017). In addition, advancement in the ICT sphere, such as better internet connection, enhances the connectivity that drives innovation.

In figure 1, Worker, work environment and work structure are the active agents who are experiencing the influence of disruptive technology. The technology gradually transforms the labour market from labour-intensive to cognitive. The three key drivers motivate and regulate the agents to ensure the development proceeds correctly. However, the uncertainties are still the issues that await to be tackled. Overall, it is a close-loop and co-existing relationship among the listed elements.

In the future, Australia is experiencing a dramatic shift toward digital services and a knowledge-driven economy made to the outstanding growth of computer science. With the positive and negative impacts, the future of “work” focuses on economic growth while looking for sustainability, innovation and regeneration. The data suggests that the labour market will be more distributive and knowledge-centric. The concerns of employment, market demand and future work-life balance remain unknown; however, the technology and social protection will try to address these issues. The goal is to find a natural balance between the negatives of work quality and quantity while exploring innovative technological potential.

Manyika, J 2017, "What is the future of work?", McKinsey & Company, viewed February 13 2020,<https://www.mckinsey.com/featured-insights/future-of-work/what-is-the-future-of-work#>.

Appendix A: Future of work in sustainability, regeneration and innovation

The picture shows a co-existing and co-dependent relationship between the agents from the future of “work” and the generated outcomes. Sustainability requires long-term, co-beneficial relationships; regeneration represents the capacity of adaption and adoption; innovation demands objective, creativity and motivation. With that in mind, the future of “work” always chases the goal of higher productivity and living standards. In order to do so, it needs tools (technological advances) that improve efficiency. The outcomes from the technological advances motivate the agents to improve themselves for a better adaption. As such, the future of “work” is critical for Australian future sustainability, regeneration and innovation.

According to OECD (2019), 14% of jobs could be automated, and 32% of jobs will change significantly. This indicates the future of “work” will focus more on cognitive, non-routine and creative areas. With that in mind, the manufacturing industry, which has the highest employment, will suffer the most as automation will replace human workers.

‍
It is also showing that it is highly unlikely that there will be insufficient jobs in the future as the market demand shifts. However, how soon the market talents can adapt to the change and start training will be an issue that barriers the employment, hance another sign of the “insufficient jobs”.

The public has been worried about the technology takeover for a long time. And the worry is based on reality and subjective feelings. More than half (51%) of Australian workers are concerned about their work due to the impact of technologies such as artificial intelligence (AI) and automation (Pash 2018). According to Pash (2018), 59% of surveyed Australian workers are ready to take responsibility for adapting to the future of work. But the speed of adaption, which is the upskilling rate, is not enough to keep up with the job change (Sparkes 2019). According to Exhibit 4, the rise of non-routine work is doubtfully able to compensate for the drop in routine work. As such, the unclear job opportunities (Refer to Appendix B ) will lead to the rise of casualisation (Refer to Appendix D), hence the lack of public work benefits (Refer to Appendix E).

Appendix E: Social Protection and the future of work

Send Dean A Message If You Have Any Question!
Best Practices
Case Studies
Industry Update
Trends